Wini the lead dog is ready to hit the off-trails 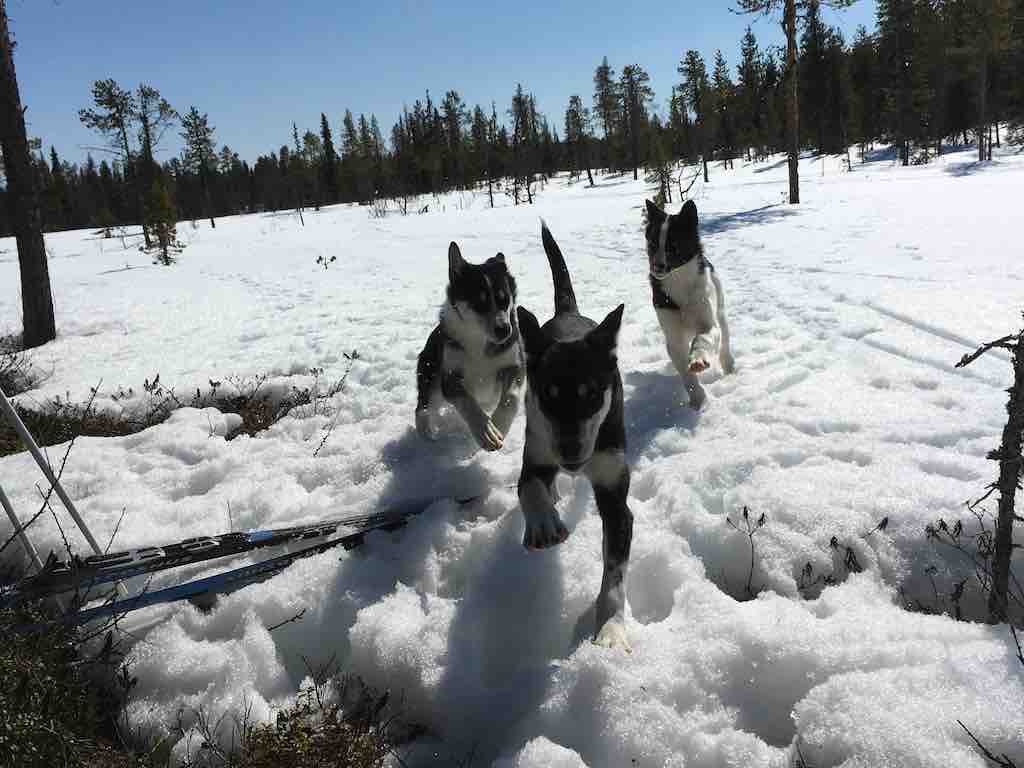 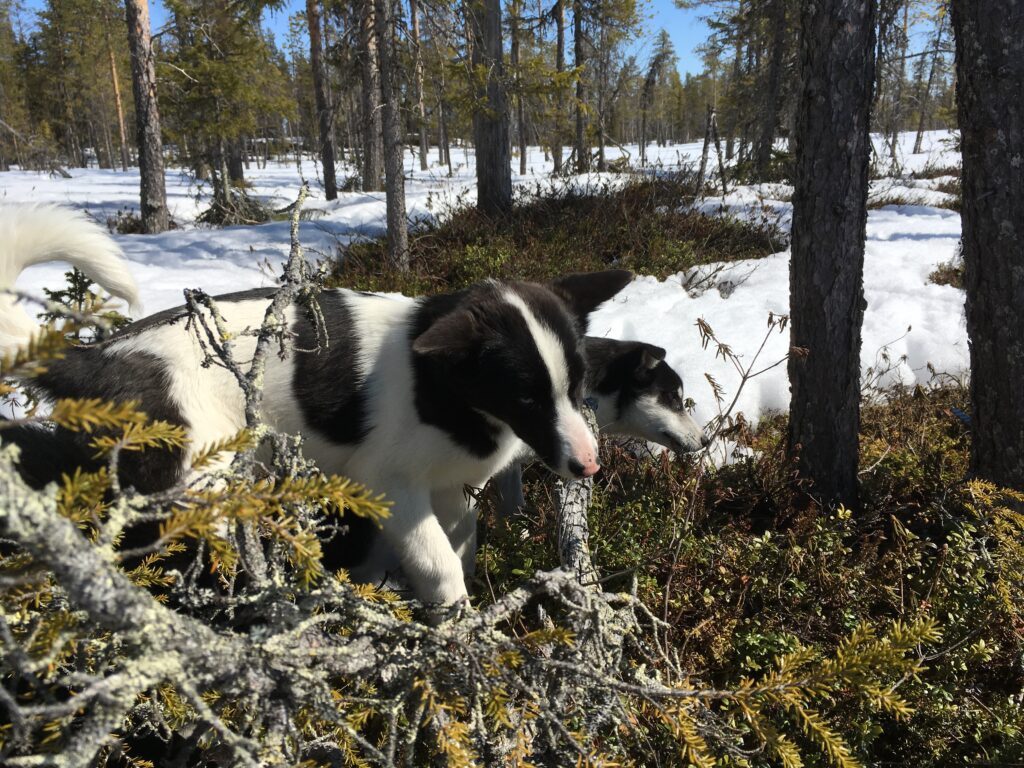 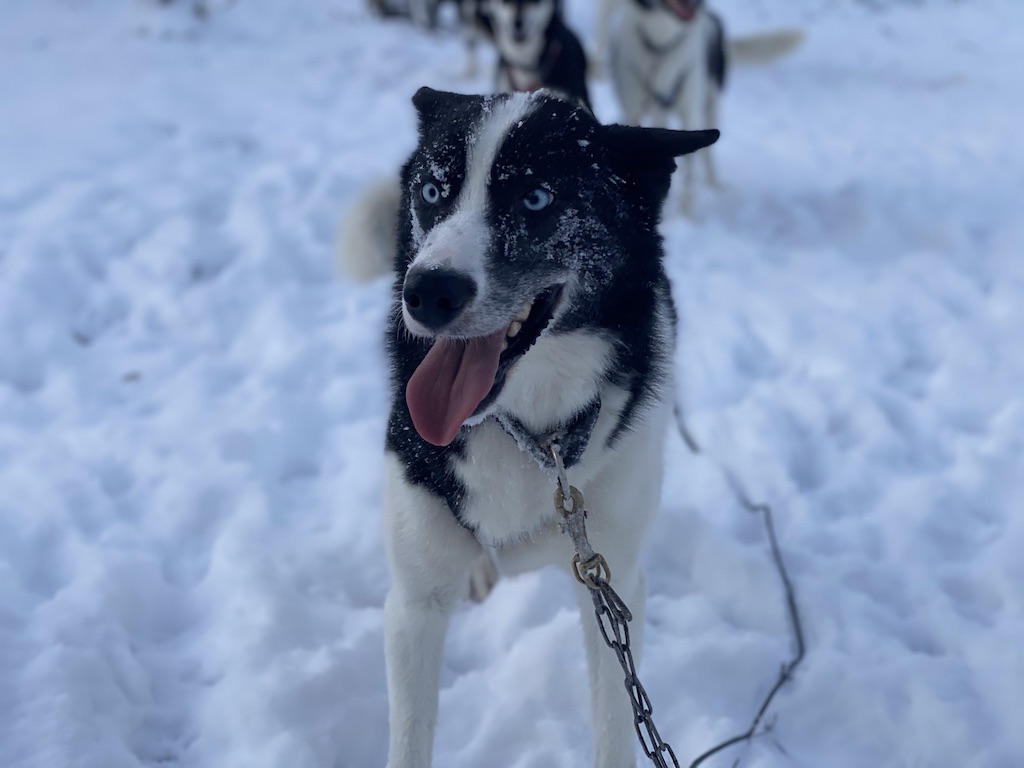 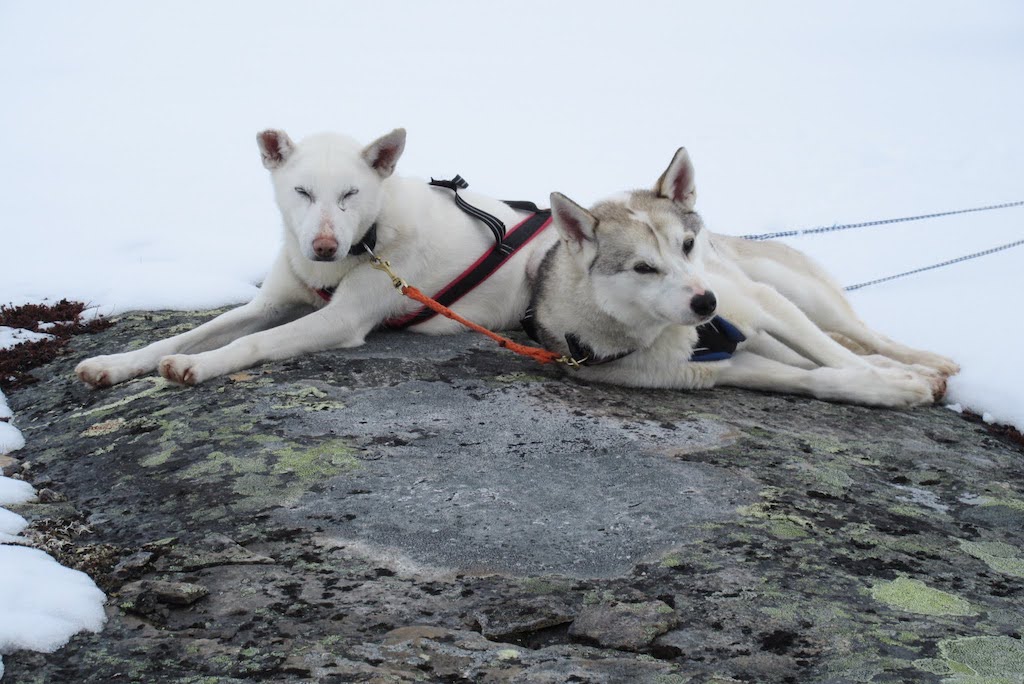 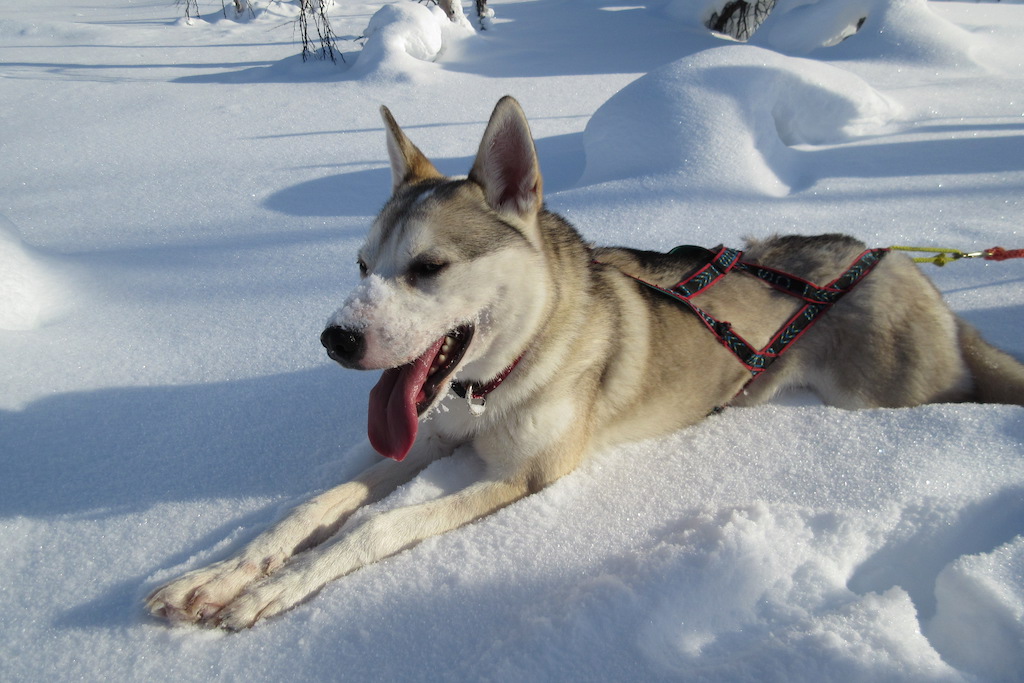 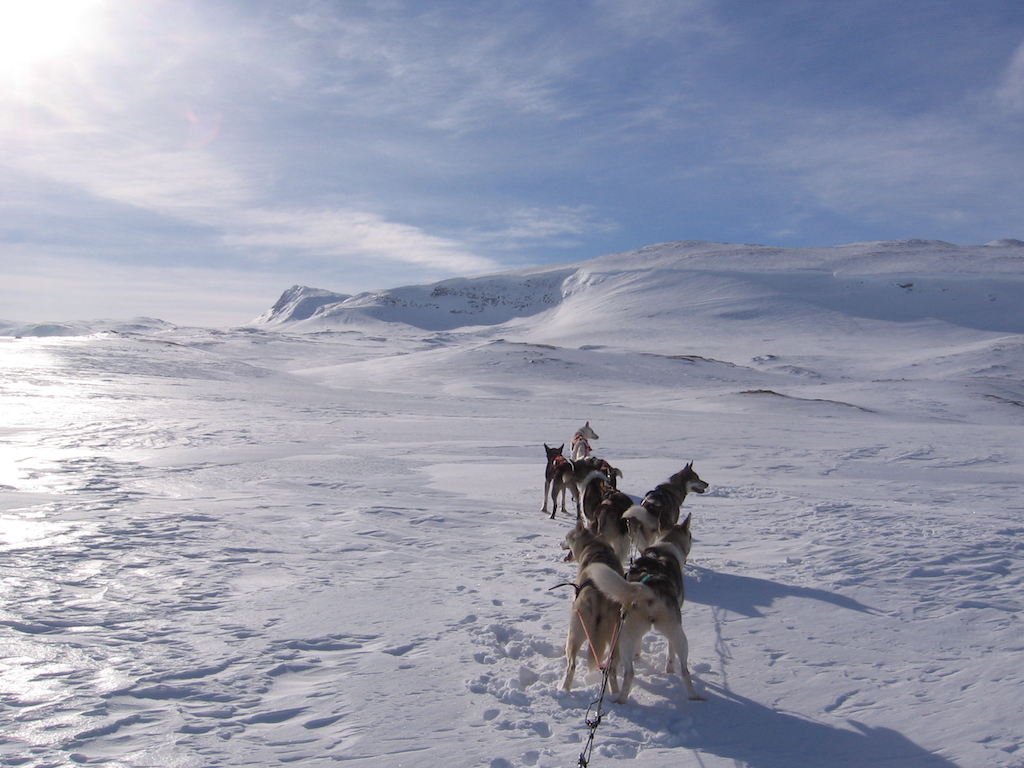 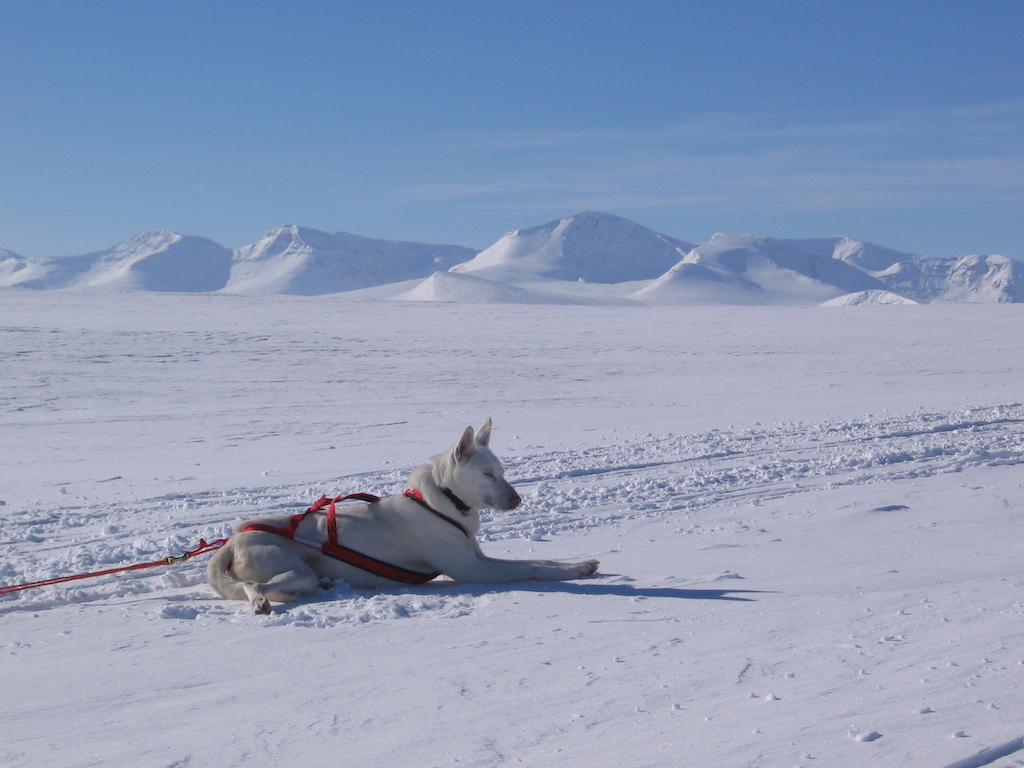 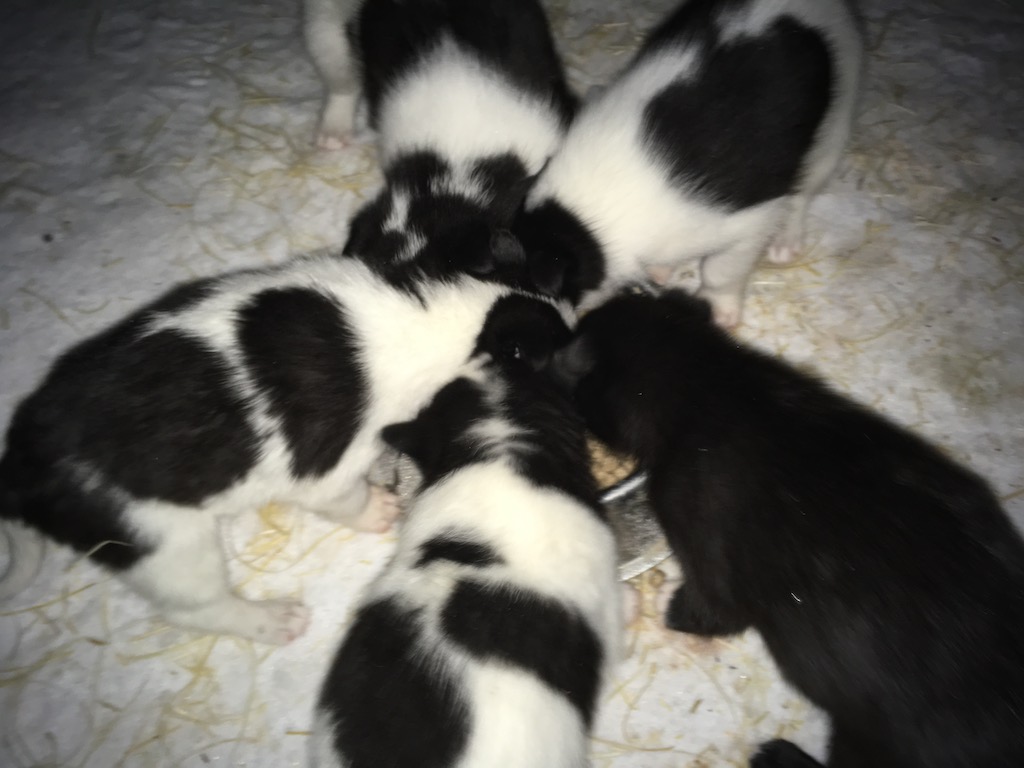 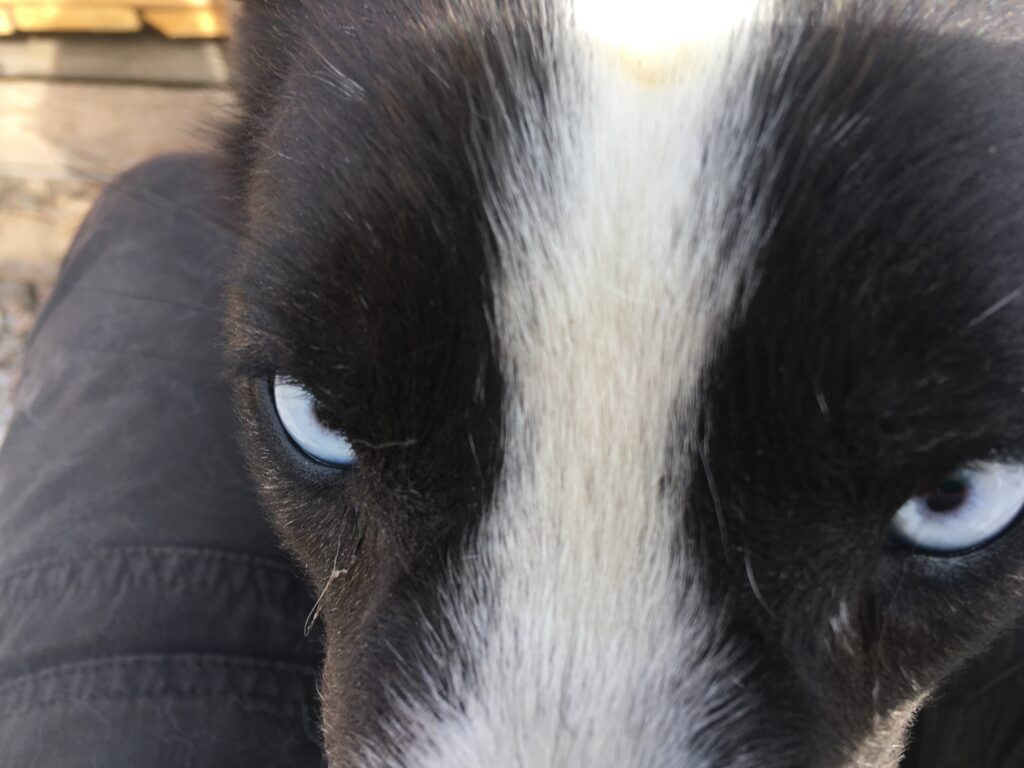 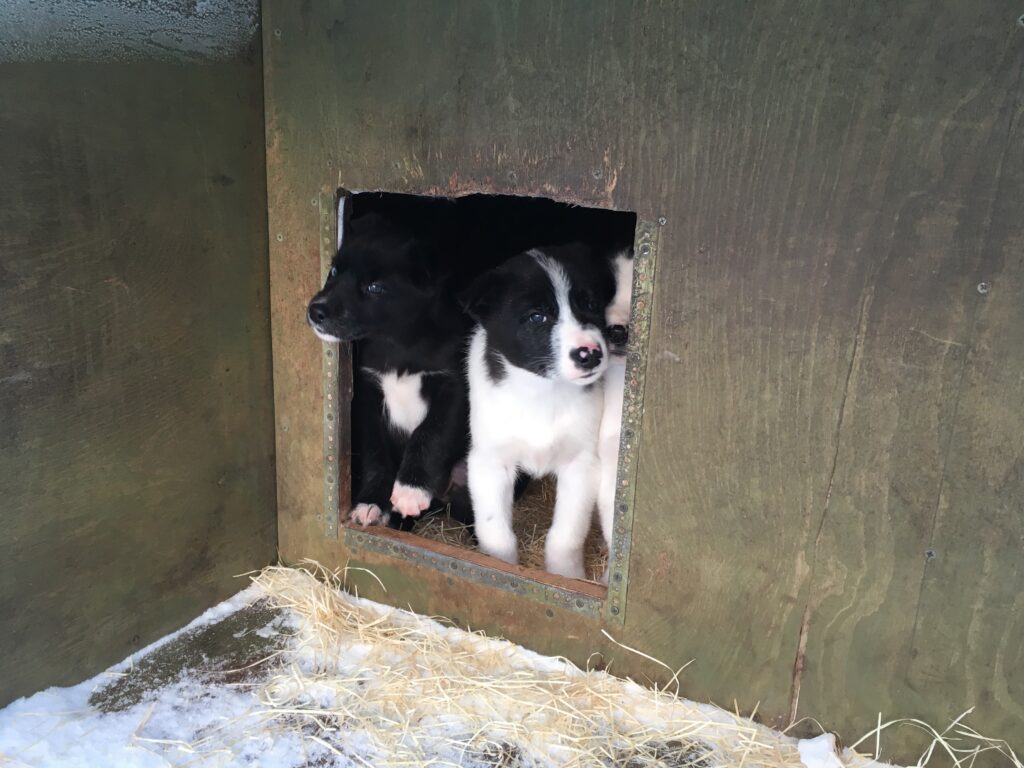 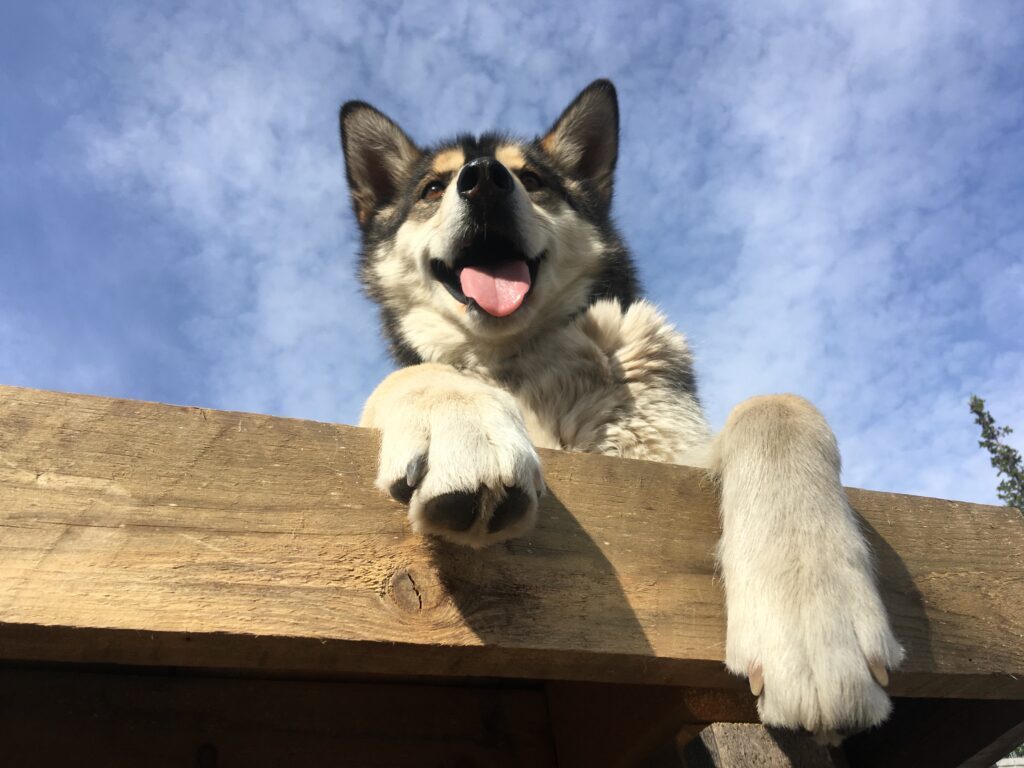 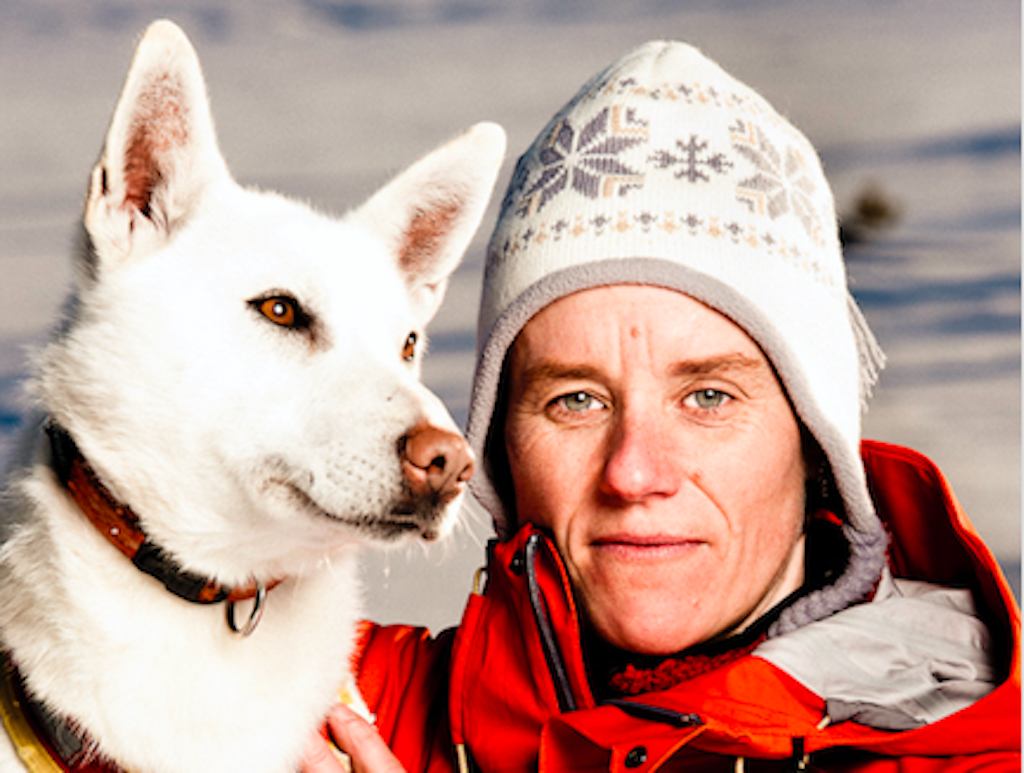 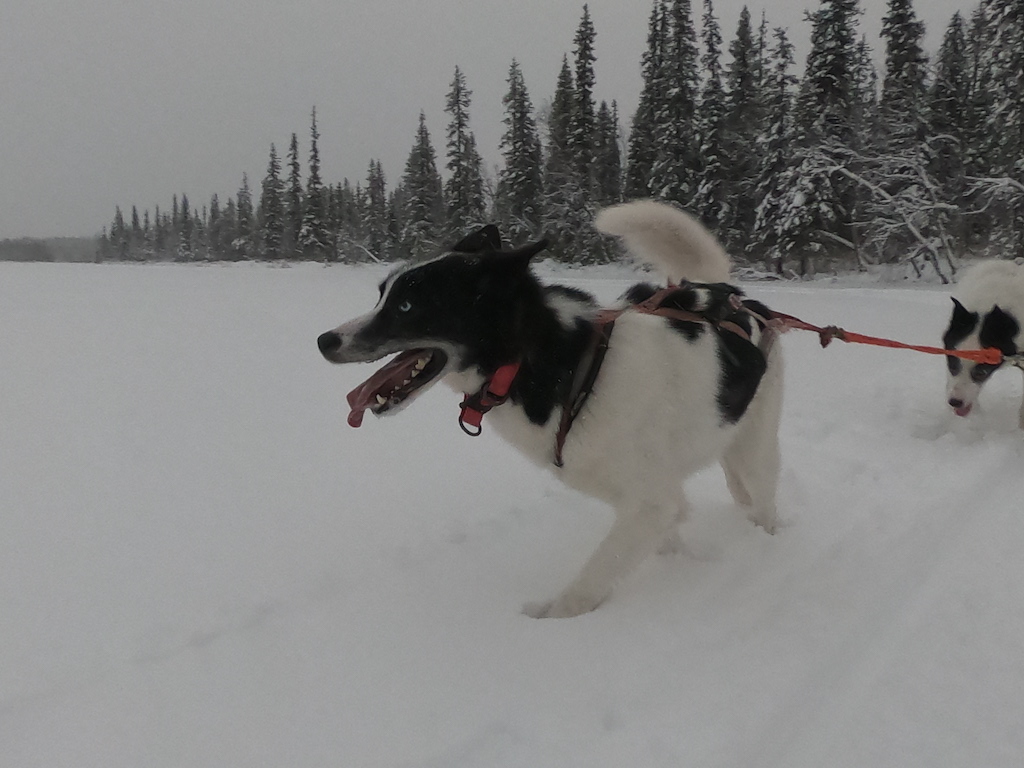 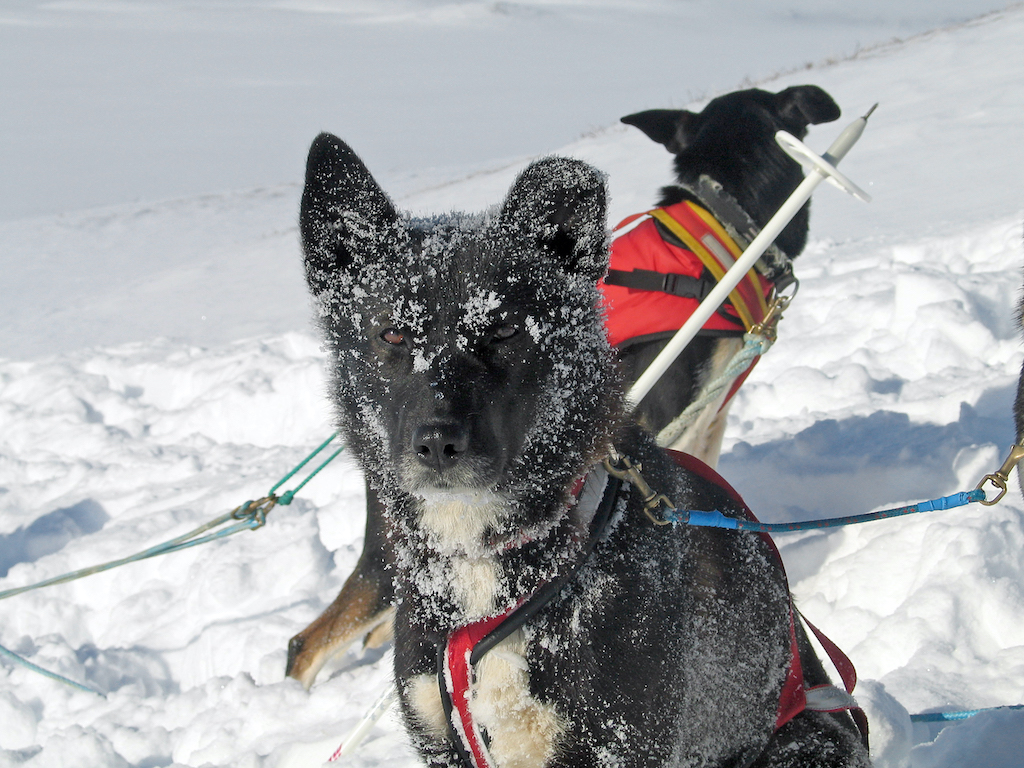 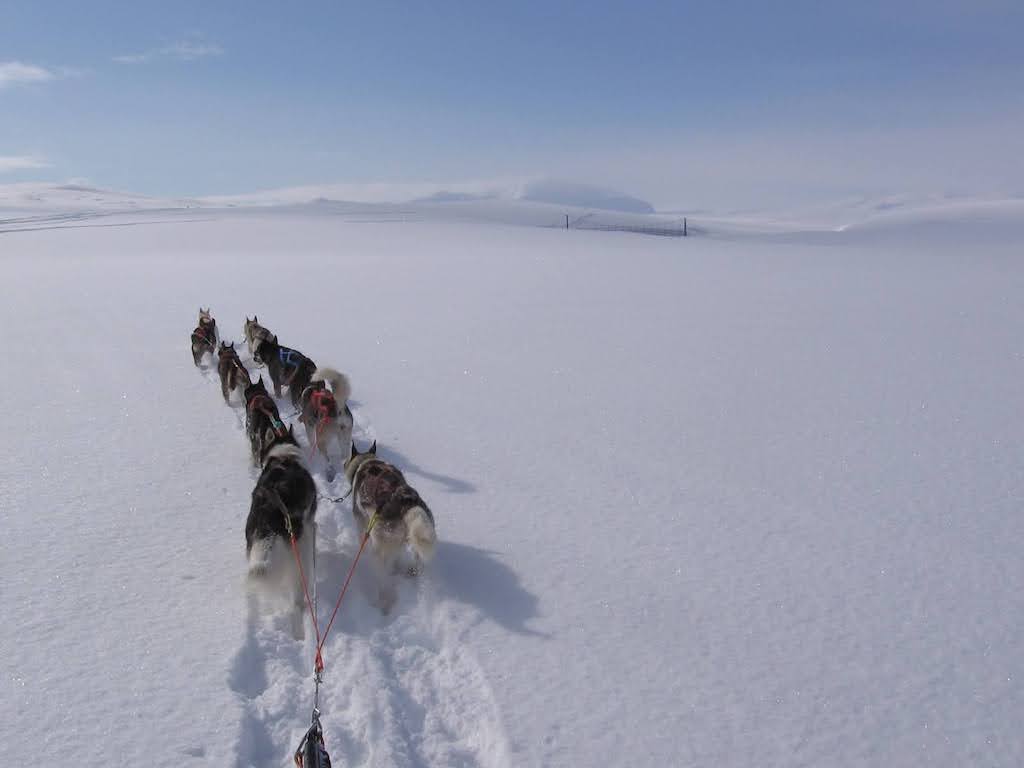 Wini, my new lead dog is ready to go off-trail. This black and white husky with steel-blue eyes showed his talent. He is ready to join my lead dogs and their special skills. Wini wants to be an up-front member of my dog team.

What are a dog team and a lead dog?

A sled dog team, the so-called team, can consist of two to over 12 dogs. Nowadays, the teams are usually harnessed as a double, each attached to a central pull line. The Eskimos of the Arctic also harness their animals as “fans”. Fan hitch connects each dog with the sled with its pulling line.

In a team under double or tandem tension, there are the following positions. Leader – the lead dog (s) and the swing dog (s) in the team. Wheeler – the dog (s) directly in front of the sledge and team dogs – all other dogs between in the lines.

The unappreciated swapping of the positions

The dogs in a team generally know their position and are very creatures of habit. If the dogs are used very intensively, it can make sense to sometimes swap the position of the dogs. Although this is not appreciated by the dogs.

The highest demands are on the leaders. Because they set the pace and have to communicate with the musher and put his commands in place. The motivation of the whole team bases on them, they keep the other dos on the go. Also, they have to find the right path, the trail, often alone. So that the musher only has to intervene in dubious situations.

They do the hardest work, especially in deep snow. The orientation and local memory of good lead dogs are astonishing. Not seldom, even after years, they recognize an old or previous path.

Backing up a husky lead dog are the swing dogs. They run right behind the leaders. Swing dogs help to turn the team left or right.

The dogs between the swing and wheel positions are called team dogs; they provide the muscle. Their job is to keep pulling until it’s time to stop.

The strongest dogs are often used as wheelers. Apart from the will to run, wheelers do not have to produce any particular mental performance. But they are as important and help to steer the sled. Good ones know to go wide around turns to lead the sled around obstacles.

Many dogs run well in the first place of a dog team and also know the most important commands left and right. As long as there is a trail under their paws or at least they have run the trail once in a past year. These dogs are called the first runners. They are as well sort of lead dogs, but with limited capabilities. Real lead dogs are much rarer.

What makes a good lead dog?

Besides making pace, keeping up the communication with the musher and being able to orientate, a good husky lead dog has further skills.

Leading the team in open areas

Real lead dogs do not have any problems to run in open areas without former trail or known route. They have to listen very precisely to the musher’s command. More, they need to be capable to fine-tune these commands as well. When not been asked for left or right turns, they need to keep running straight in a line. A difficult skill for example in stormy weather or/and during whit outs.

A good leader can think for itself

If a musher asks them to go in wrong directions or across bad ice, they must have the confidence to disobey. The musher´s trust in the lead dogs must be big enough to realize such critical situations.

How do I recognize and select potential lead dogs?

To recognize and choose a new lead dog is each time a little different. I try to identify a potential leader in the first runner’s position. Young dogs running beside an experienced husky lead dog is a good way to give them enough security. So they can test the new position. In general, females start learning lead earlier than males. Because they mature faster and are often more focused on obeying their boss.

How do I train young first runners to become good lead dogs?

I only begin to test and train new lead dogs under seamless conditions in the team. When knowing everything will go fine. I do this because a young dog upfront needs my complete attention. I don’t want to be talking to another dog in the team. For example, telling it to untangle itself. I want to focus on my communication with the new lead dog running upfront.

During my 25 years of working with sled dogs, I’ve always been lucky enough to have at least one real leader in my dog ​​team. With my help, the experienced lead dogs always trained the rookies beside them.

At this point, I like to remember the passed away girls Kiisu, Tellu, Kimaira and Bianca. All four did an excellent job as a leader.

Above all, husky lead dog Bianca has made a name for herself in the local musher world. For the iron lady, no weather and no conditions were impossible. My dog team often went ahead with Bianca in the lead to break the trail in critical situations.

For the past two years, the meanwhile 6-year-old male Ori has been running as a lead dog. Yet, he is more of a fair-weather friend. Storms and bad weather are not his strengths. As well he has a very strong own will, which can be difficult in certain circumstances. As well his sister Luna is close to being a real lead dog. First runners are all my actual seven running sled dogs.

Improving skills or being a talent

All my lead dogs have improved their skills. In cooperation with me and through the experience they built up their knowledge. Only Bianca was born as a talent. For a long time, I thought Bianca was a “once in a lifetime” lead dog. Until three days ago …

My nowadays 4-year-old male Wini was a problem puppy. Serious attacked by mites made his first few weeks of life difficult. But I recognized a high intelligence in his behaviour among his brothers and sisters.

Despite being well socialized, Wini was (and partly still is) an insecure, shy, and fearful dog. He preferers to run alone, regardless of his position in the team.

With increasing security, he did last year his first good jobs as a first runner. Due to his nature as a lone fighter, he would have loved to do this by himself. But because of his insecurity, he needed the support of an experienced lead dog at his side. Which he didn’t like.

Last summer he cast off his last doubts about himself and his surroundings. The shy and backed off sled dog showed in the cart training where his position in the dog team is. First, as a first runner, and best alone, with no buddy at his side. In this position, Wini became the happiest working machine.

For a few days now the snow has been just about enough to train with sleds off the beaten track. Mushing off-trail on too little snow is uncomfortable and very demanding on musher and sled dogs. Yet, it has the advantage that one can still drive through everywhere, as the dogs don’t sink too much into the snow. A wonderful and in many ways educational time for musher and team members.

Some days ago, I led Wini into unknown marshes. My expectations weren’t too high. Because I thought that his enormous commitment would not allow him to listen to my commands in new areas. So, I was almost shocked and taken by surprise. The little workhorse carried out every single one of my commands with precision.

The delight was endless

Out of sheer joy, I wanted to play the senseless left right left, right, left, right game. But I knew better and didn’t confuse him. If I didn’t say anything, my little cute beast runs precisely straight across the open space. That is like mentioned earlier, one of the more difficult skills of a good lead dog.

I was overwhelmed and overjoyed. Likewise, Wini himself. Our always very good bond reached new heights. I felt how happy he was that I had finally discovered what he is capable of. Don’t underestimate the importance of doing the work as a lead dog alone.

Now it is important to strengthen the new husky lead dog in his work but at the same time not to overwhelm it. The work as lead dog is very demanding. And it asks a lot of energy from the sled dogs, especially at their beginning upfront.

An exciting and wonderful time is around the corner for me and my huskies. And because I will not work during this winter, we will give ourselves on many small and large adventures.

Stay tuned and follow my blog simple life with huskies!