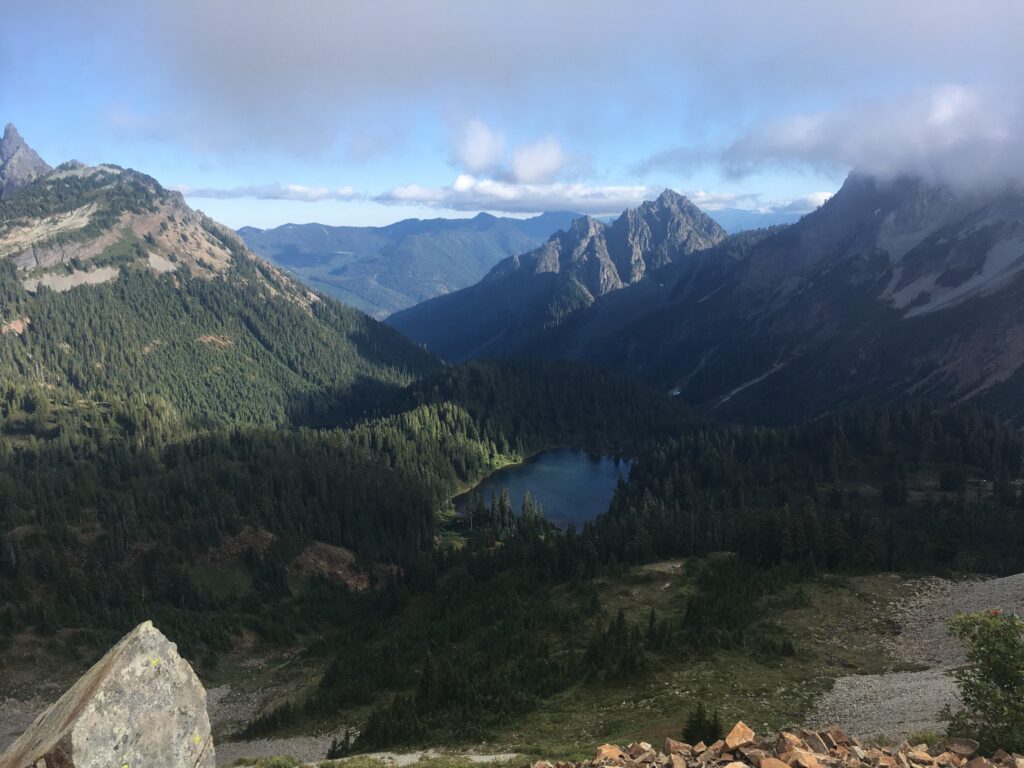 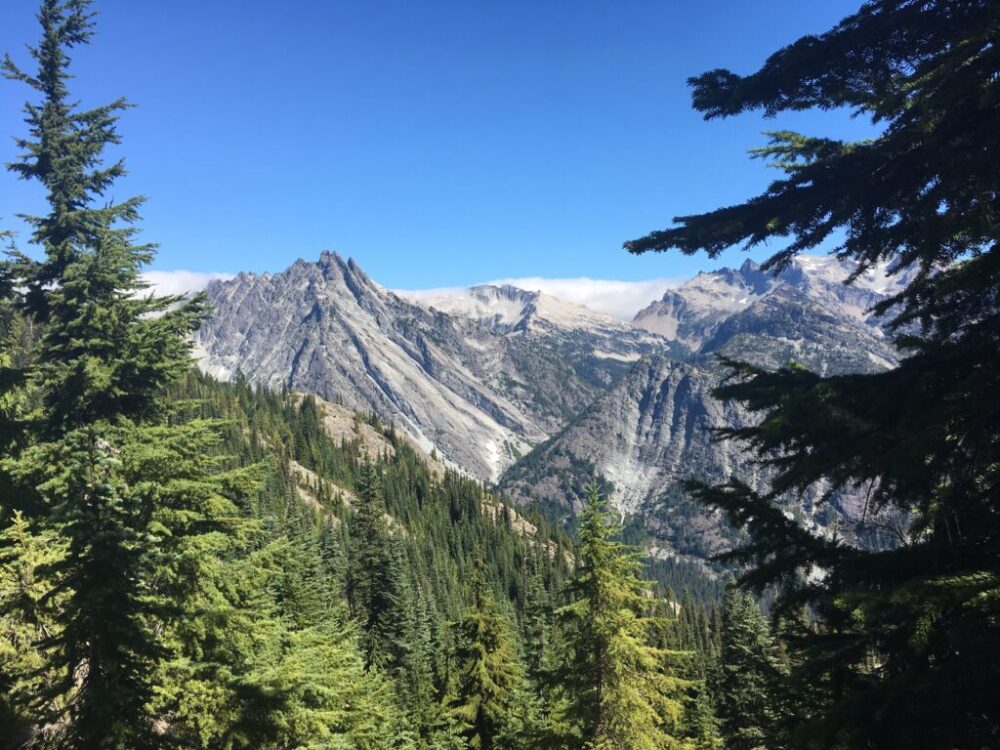 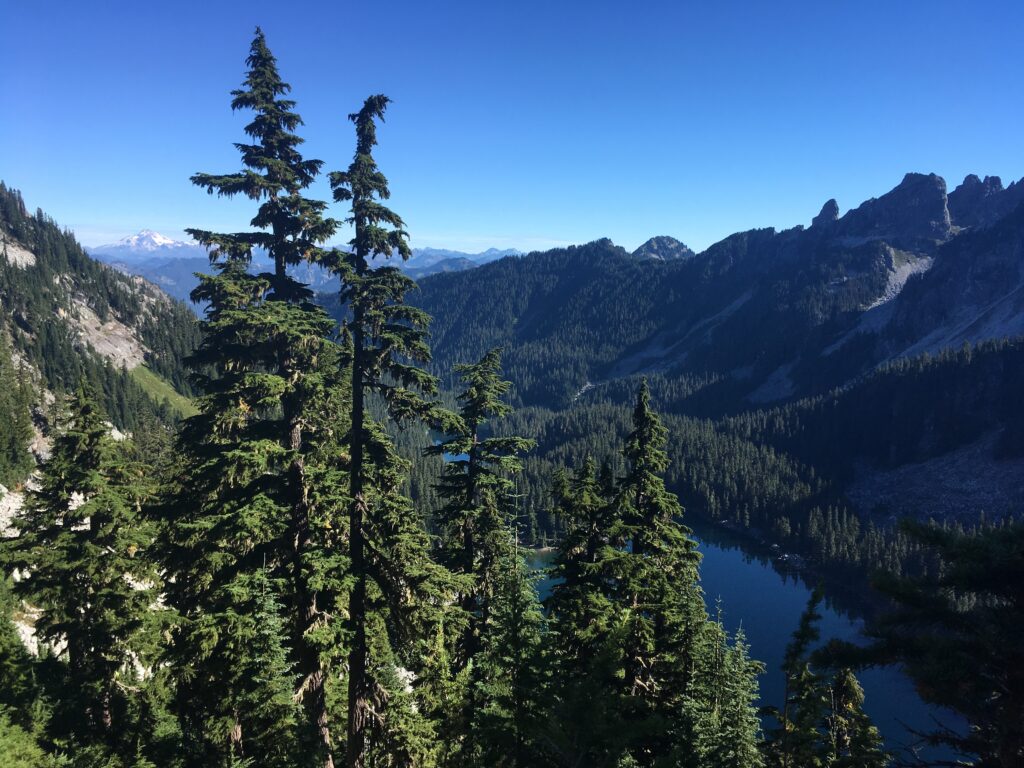 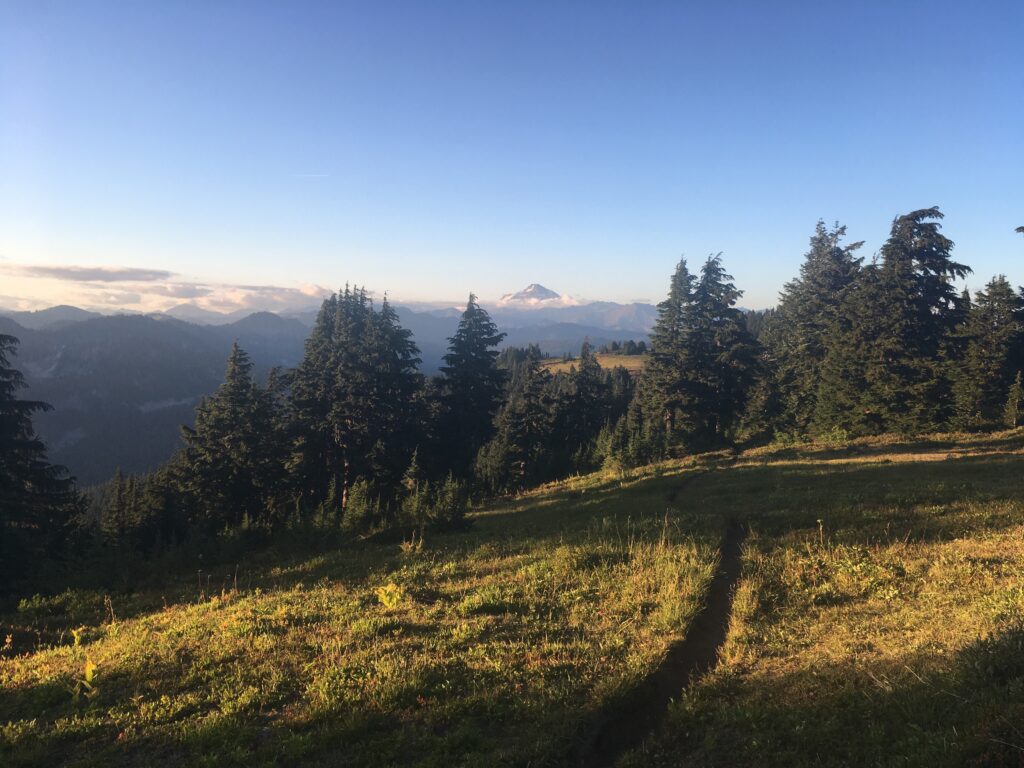 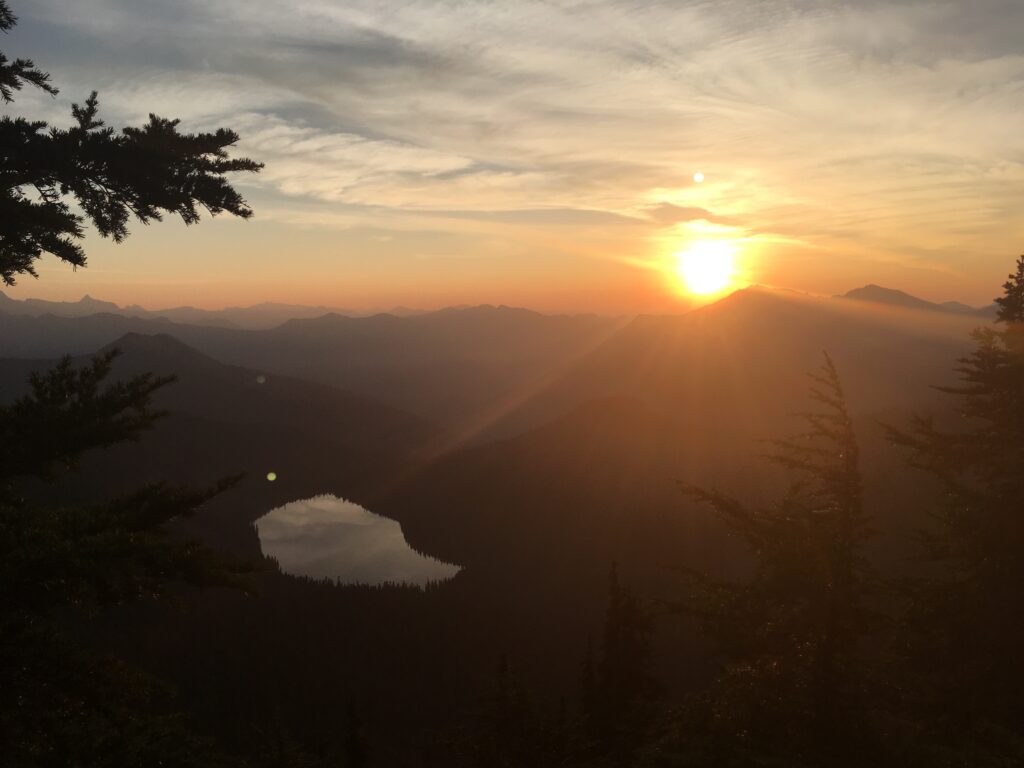 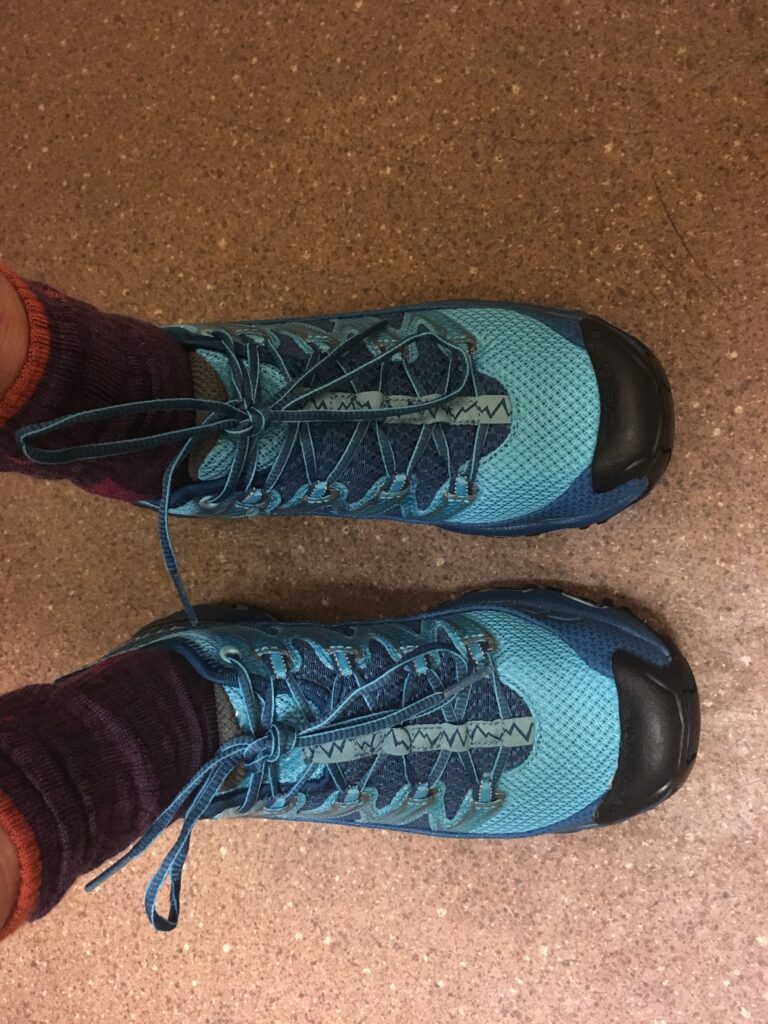 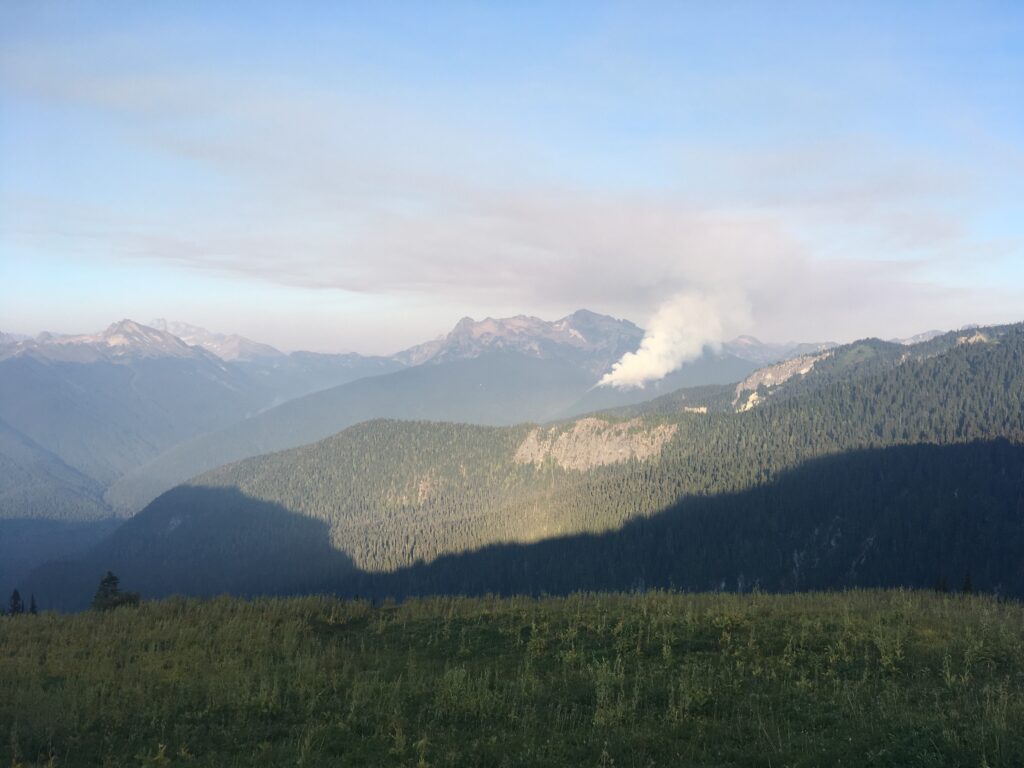 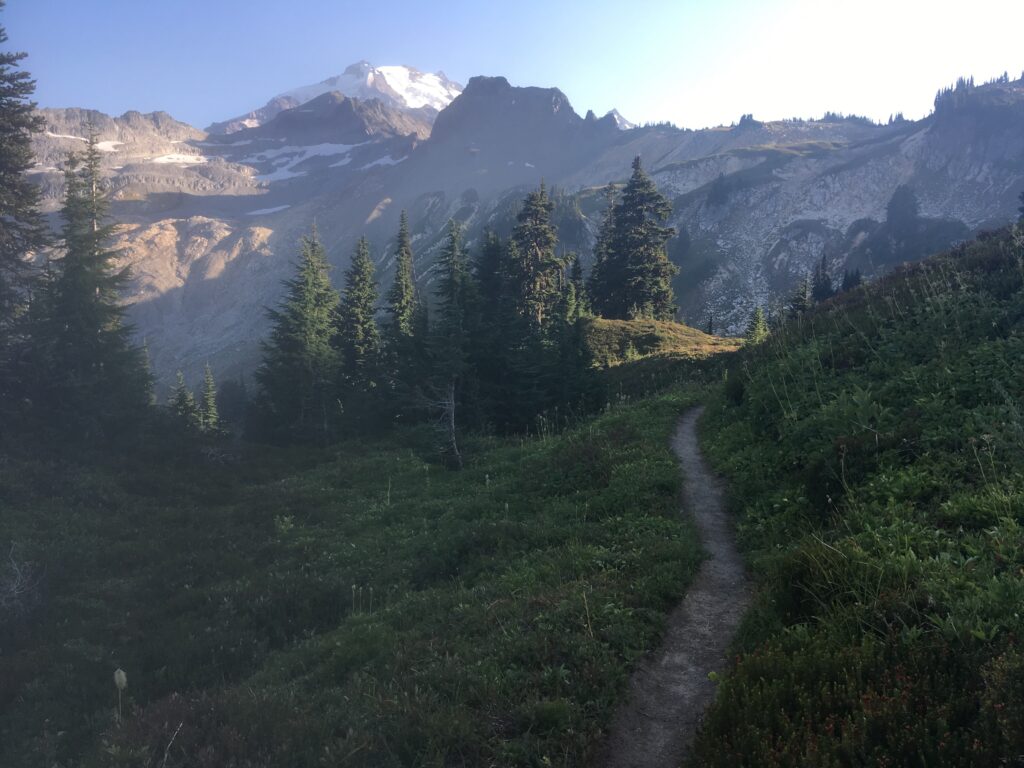 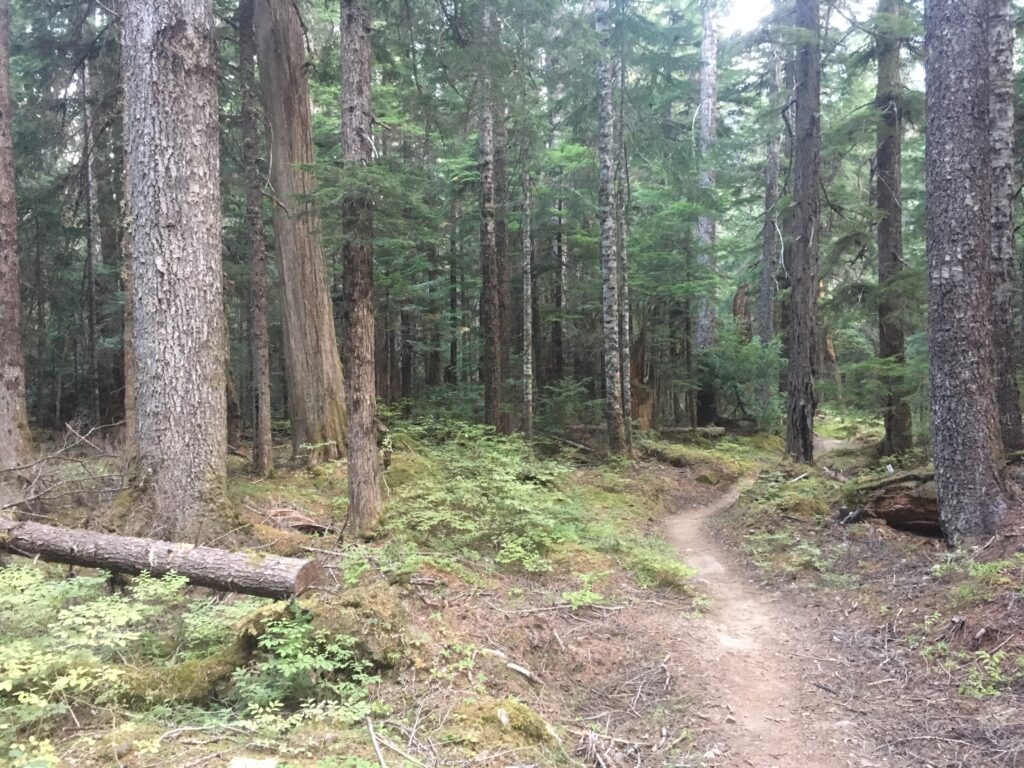 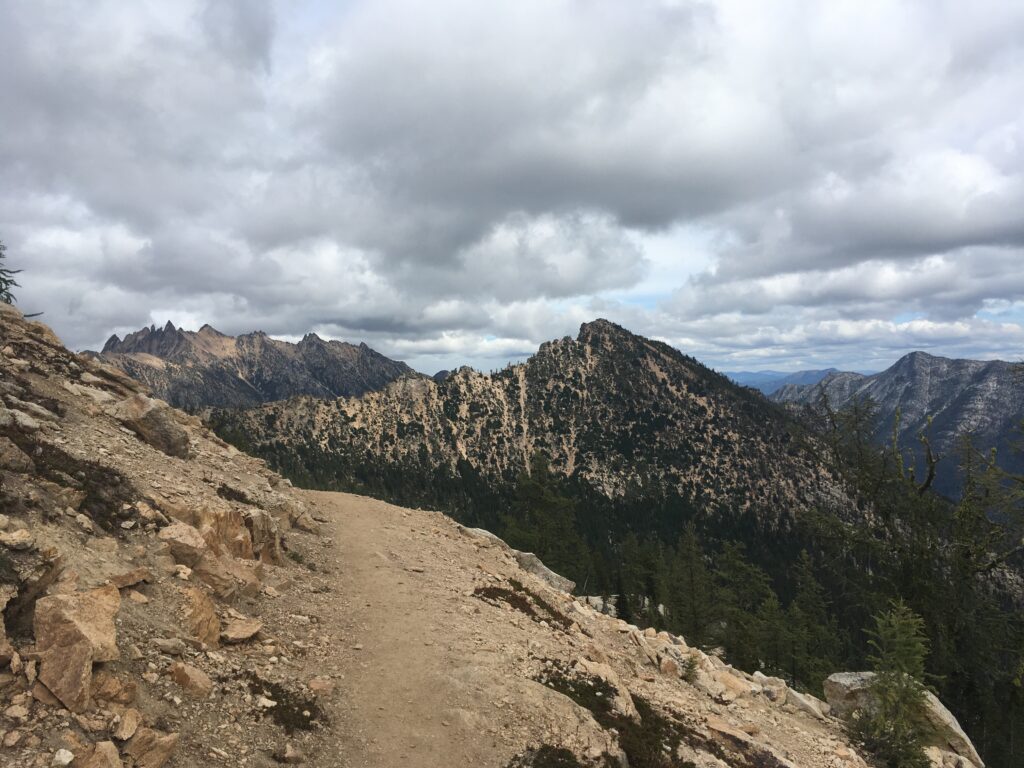 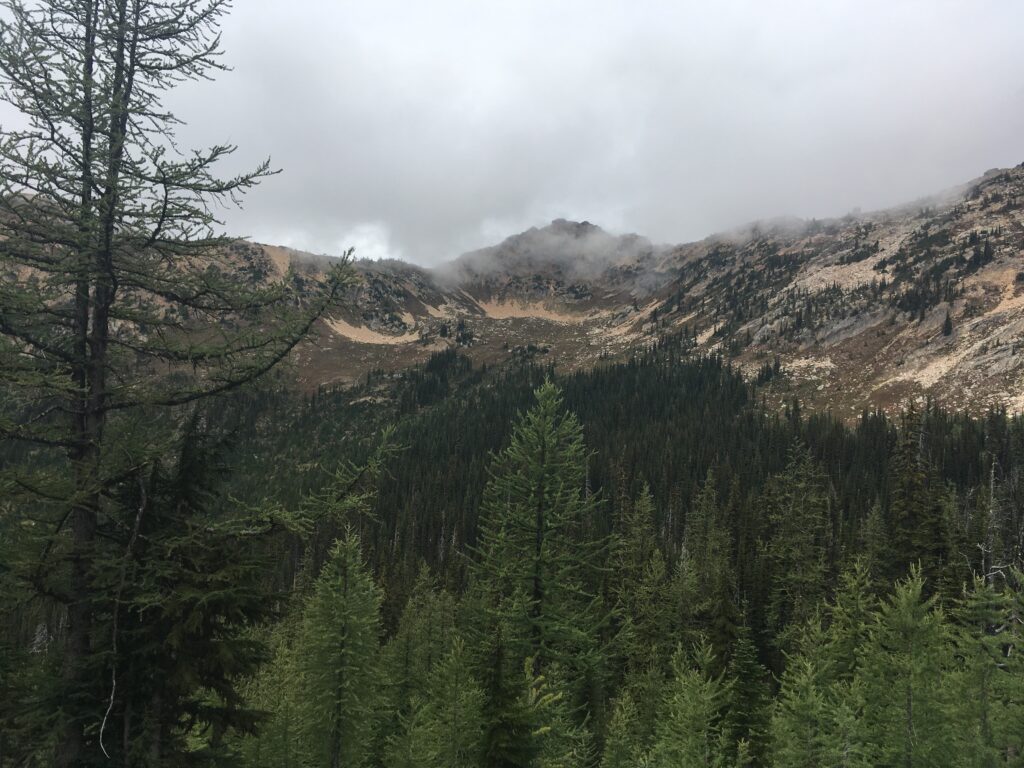 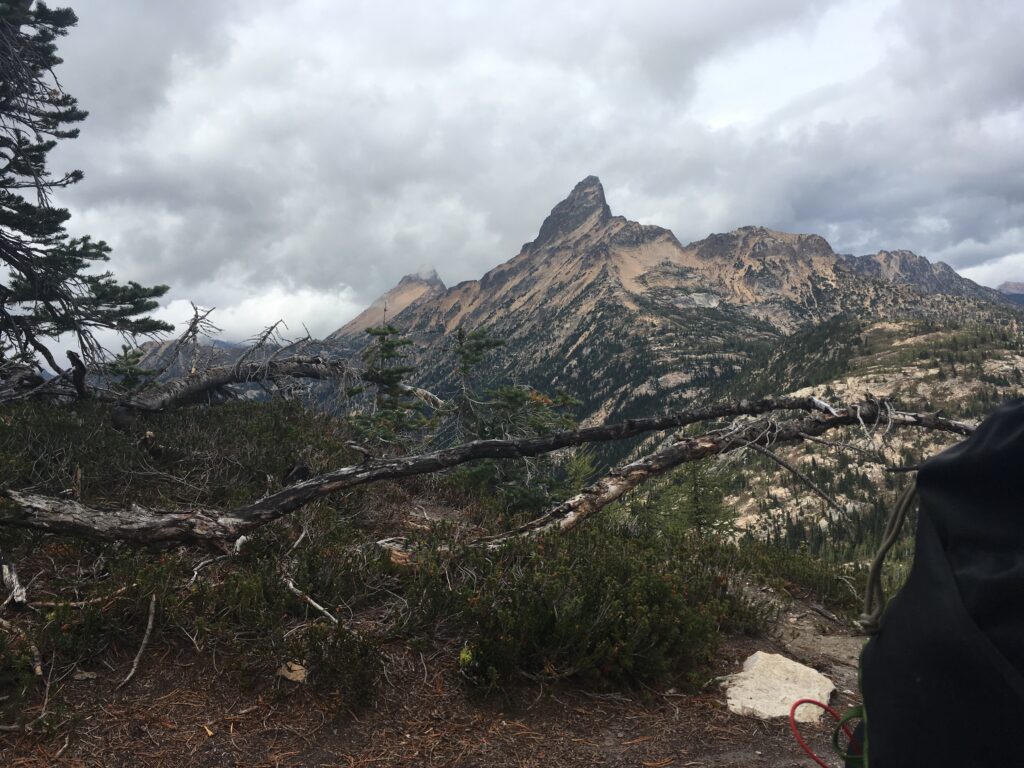 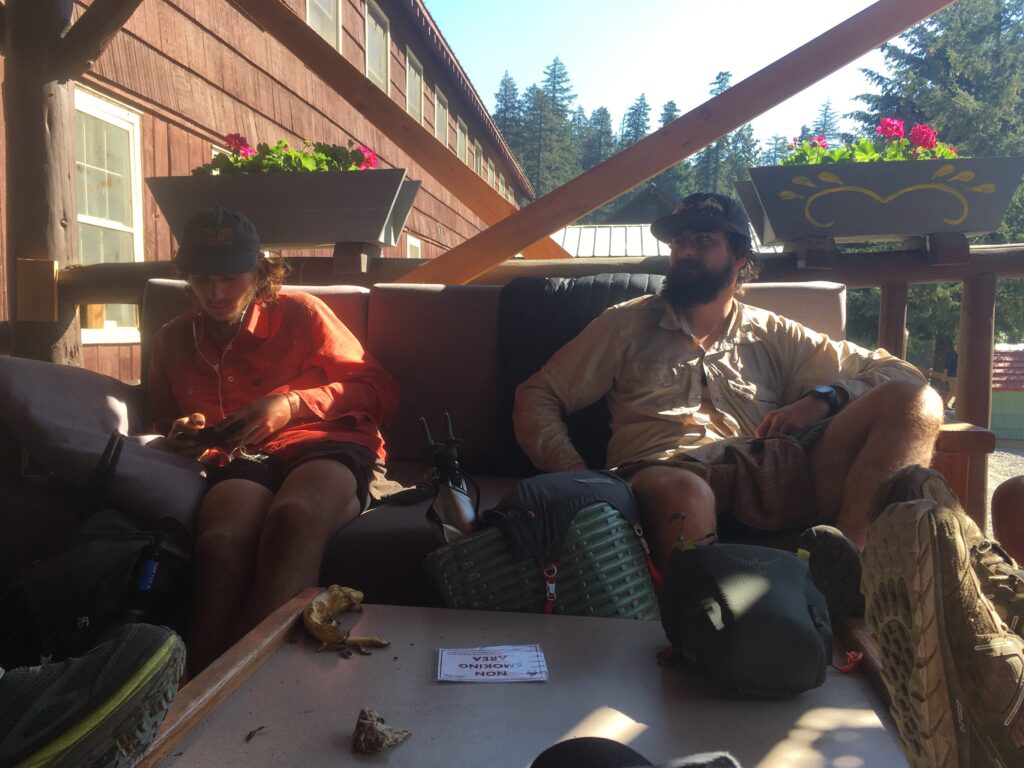 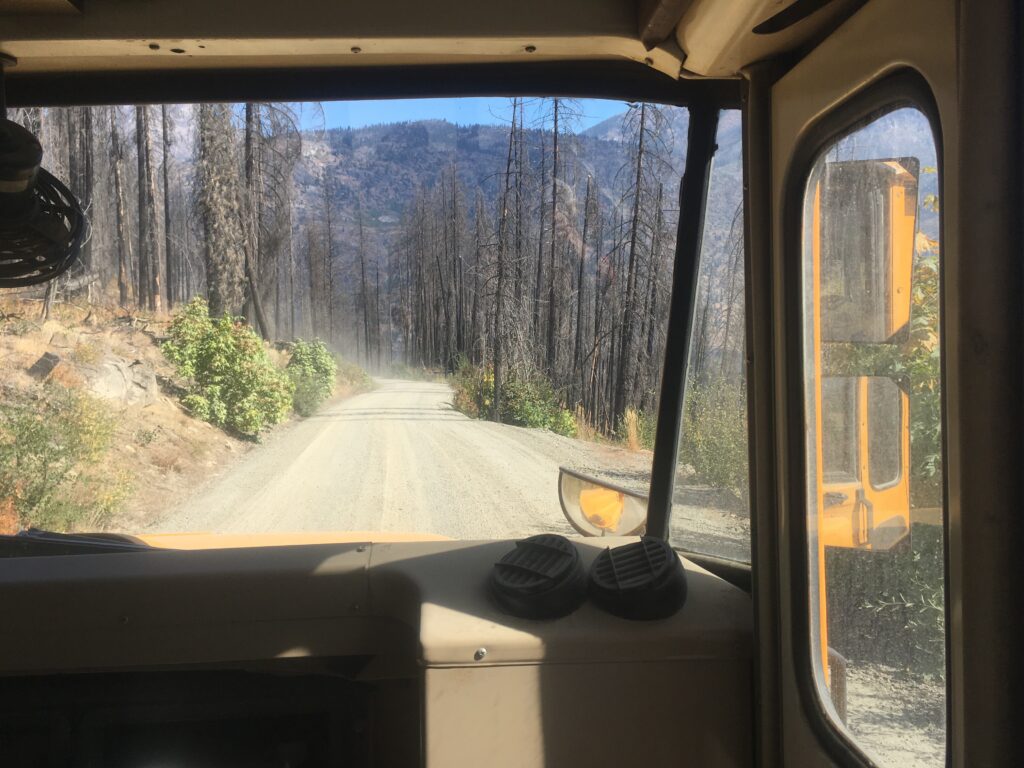 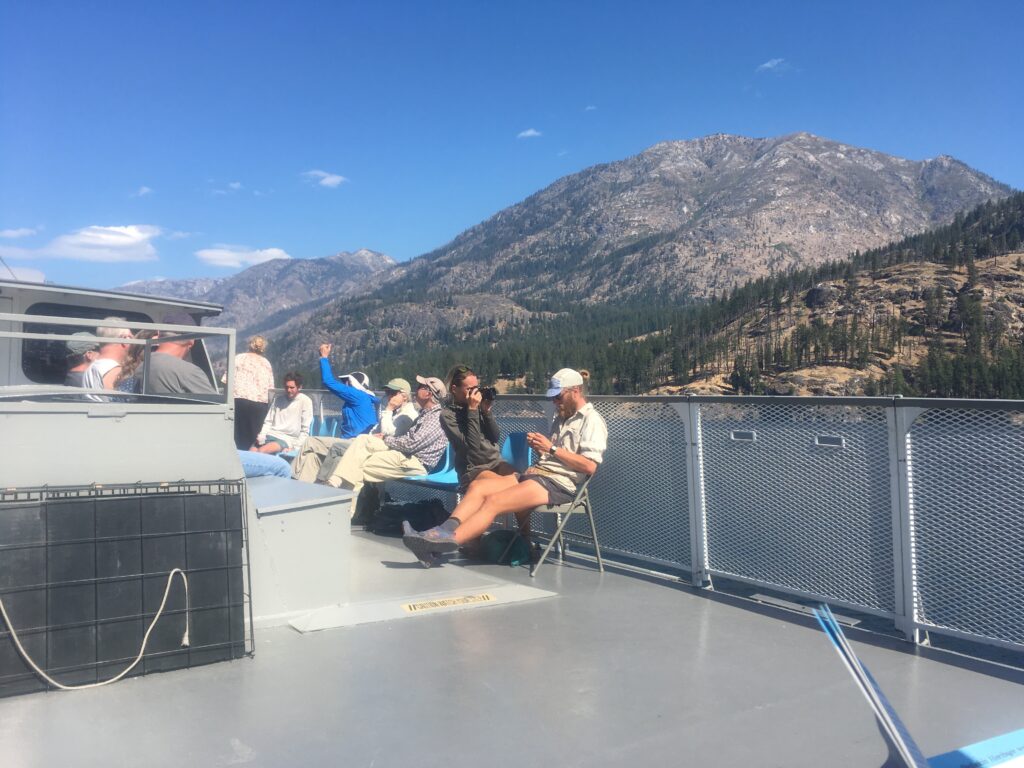 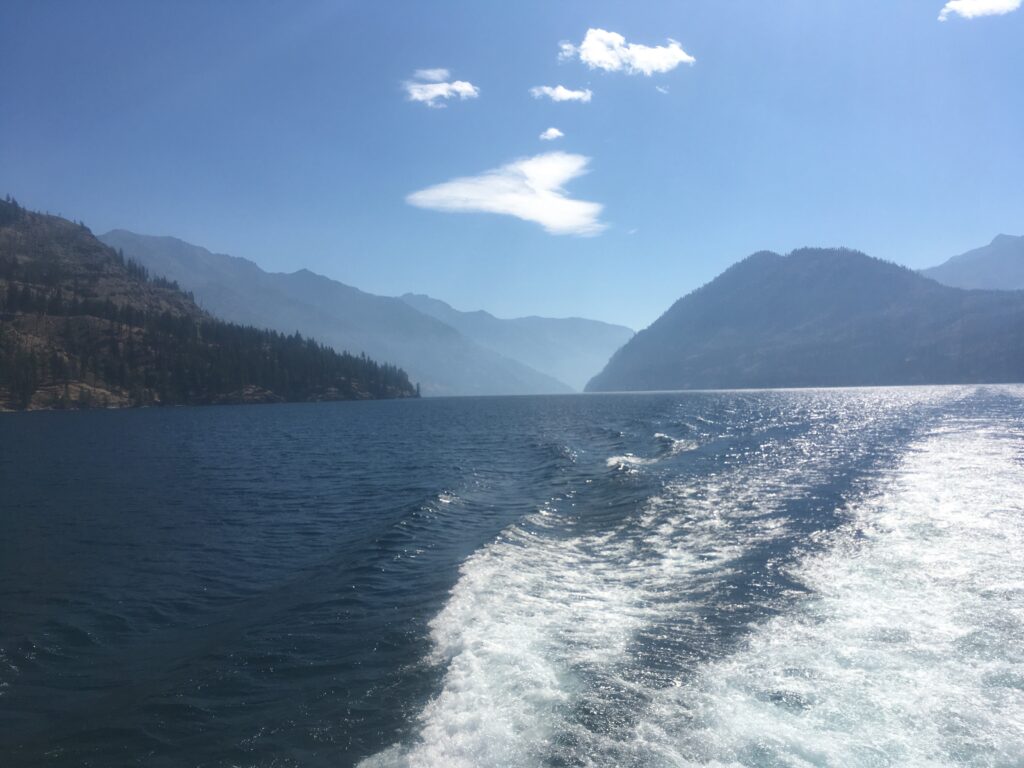 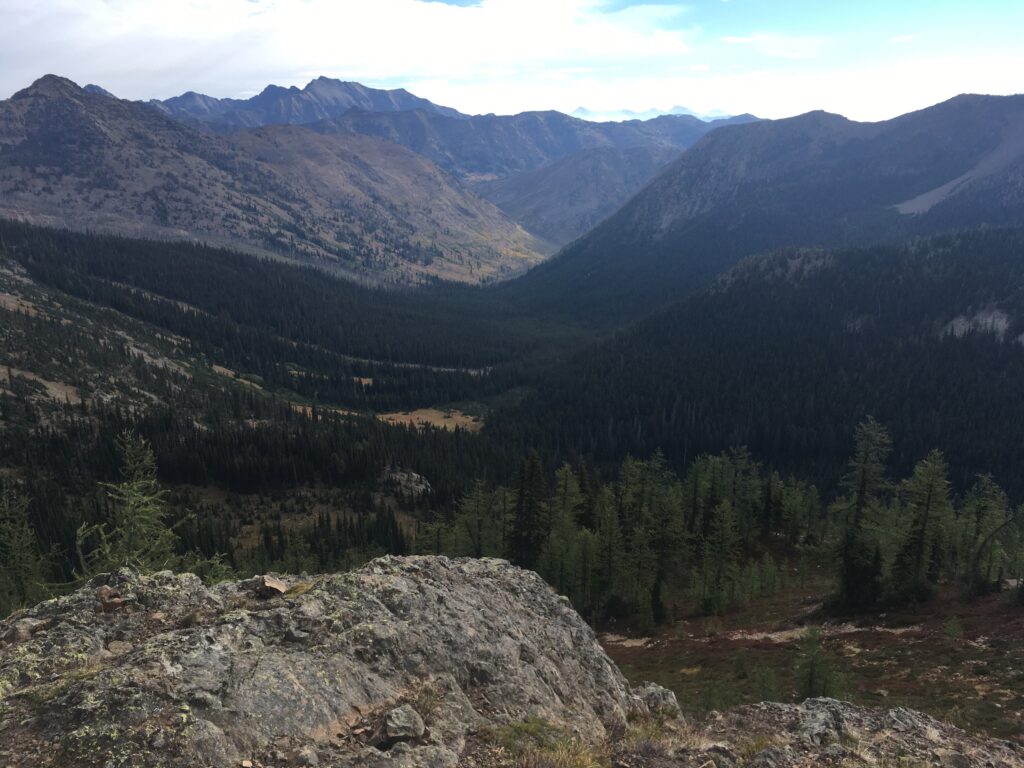 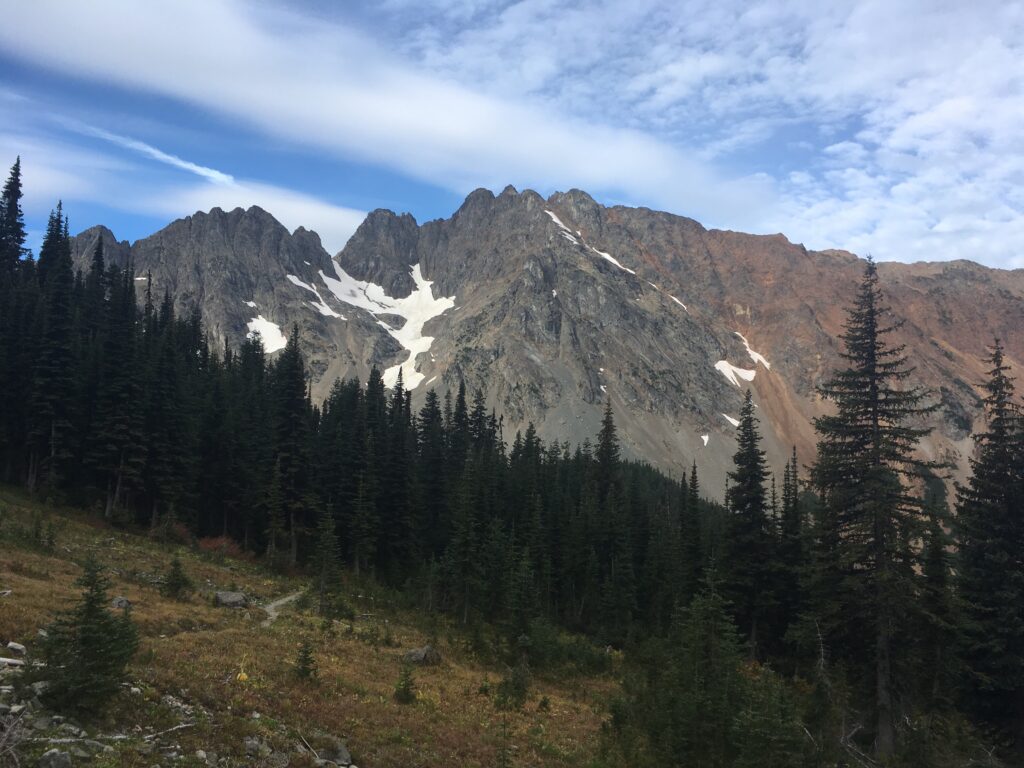 Pacific Crest Trail – done! Geared up with warm equipment, recharged and highly motivated (as well since the pct trail just reopened again across the border) i left Seattle. the city break was good. booked flight tickets to Switzerland, good food, a bed and having non-hikers around me refreshed my senses.

The last part of the Pacific Crest Trail

was finally like expected much more interesting and beautiful. still a lot of forests but a lot of spectacular mountains and great views! but… of course a hell of a bit harder again! the daily elevation gain and loss was immense! never less than 2000 m a day! all of a sudden it was harder again to do the daily 40 km. additionally, because the days became markable shorter. beautiful light and great colours! autumn is arriving, simply an adorable Saison wherever!

My body started to get ready to be done… the knee and the foot hurt very bad constantly. even with drugs. even besides this, I began to be very tired. mentioning this here and there to fellow hikers I realized that I am not alone! maybe normal with about 4000 km in the bones? a wish to be finished with the Pacific Crest Trail appeared more and more often. again very interesting to experience how straight our body and mind are connected.

The bavarian village Leavenworth postoffice had the last pair of shoes waiting for me… the same type like the last 3. just before I approached this place I got to know that the following day was labour day… a holiday here! I don’t have time to wait a full day for the postoffice reopening since I booked the flight back to Europe. luckily there was an open outfitter in town, I ran in there, let them pick a range of shoes in my size and chose the ones I felt best in. far away from the comfort I had so far! oh oh … how is this ending? to hike on in the old ones was, unfortunately, no option, they were already falling apart. no choice, this hard new shoe has to bring me along the last part of the Pacific Crest Trail to Canada. the first miles went well before the damned blisters and pressures came back! but no worries, its only pain, they will not have time enough to get seriously infected, since I will be finished before.

Some more wildfire detours are coming up. expecting to see the next fires smoke not before a little while, I was very surprised to see smoke and fire such early. shit, this must be a new, unreported fire! and close! I saw trees cracking under the flames and really hoped this being out of my way up north! with the poor maps on the phone, I try to figure out where it might be. hikers with Garmin inreach get in touch with the world to get some news. but no news – must be good news! I simply push on the next morning. betting that we would have got some information from outside if we were risked. but I was lucky once more and enter this next planned detour… 10 additional miles to get around bannock lakes fire. detours are mentally heavier to hike. we call them empty miles, hiking which doesn’t bring us closer to Canada, the end of the Pacific Crest Trail.

The last stop in civilisation comes up. Stehekin, a resort with a restaurant and a post office. located ashore of a more than 80 km long lake, isolated and only reachable by boat or foot. a very idyllic place. again I meet some friends which I haven’t seen for a while. this happens often, is unexpected and always a happy moment! especially since we are not so many hikers anymore and among the only 10% of all starters who finish. a food box is waiting for me in the post office, sent out by me two weeks before. together with some items, I want to bring home I pack all this delicious food scrap for the last 4 days. the pack is heavy again, but I am ready to make my way up to the border! a very good feeling to approach the end. I am fed up with me always stinking, being dirty and dusty constantly, stressing to the bathroom as soon as the first sign pops up, sleeping daily elsewhere, eating dry food and bars, packing every day, having daily pains, being non stop hungry and tired – I simply want to finish with the Pacific Crest Trail and go home soonest!

After leaving idyllic Stehekin my mood changes immediately and a melancholic feeling hits me. I am hiking my planned section in this beautiful afternoon/evening in autumn weather and had a lot of weird thoughts: I filled my backpack the last time, I have only 4 tent nights left, only a few rivers and mountain passes to cross. I have only a few eating and playing chipmunks to see, only some marmots shouting at me, only a few sunrises and sunsets to watch at, only a few refreshing foot bath at lunch, only a few coffees in the sleeping bag, only a few happy feelings while finding the perfect campsite, only a few creeks as relaxing music at night. only a few upcoming daylights as an alarm clock, only a few days to be in motion early morning to the evening… do I really want this to end? NO, I DO NOT! and I have less than 100 km left to the northern terminus of the Pacific Crest Trail!

Before I left home in May I wrote down some things I wished to learn during hiking Pacific Crest Trail. lately, I read these lines again and unfortunately had to admit that I didn’t learn almost any of these points. but I learned a lot of other things: I got to know my physical needs to the annoying detail. I reached my mental limits twice and learned to handle them. I learned to live even more simple than I thought is possible. Besides the known fact that I love being alone, I experienced me being very social and enjoyed friendships with kindest persons which can be hidden in very unexpected shells.

The day before hitting the border was one of the most beautiful ones on the whole trail. I camped between rainy pass and harts pass. harts pass is the last car road to cross on our side. the weather was supposed to be bad with rain and high altitude snow. waking up I saw that it was still great weather! up and out on trail… the autumn colours were again more intense, gorgeous! it was minus degrees during the night. the trail went up to highest elevations and followed one ridge after the other. I could watch the two weather fronts fighting… low and high pressure. most amazing landscape and colours! on harts pass, I met the last trail magic on the pct. it was ron, the same guy who gave me somewhere in the desert a burrito since I was the only woman there. I remembered him immediately, which made him so happy!

From harts pass, I had to turn off for the last detour. around the fire which for a while even blocked the border. the alternate route followed a side valley to the crest. the smoke was not too bad, but I could clearly smell it. but the low-pressure weather started to win in the afternoon and brought rain, only one more night in the tent…

That night was scary! I camped out in an area which burnt down some years ago. already a lot of vegetation is back but the trees of course dead and week. I got heavy rain and strong wind for the whole night. all of a sudden I heard a huge tree cracking and falling to the ground very close to me! I was awake! and stayed awake… soon the next one, even closer! I started to think about hiking on, I was afraid! but even more scary was to hike in that night. I stayed, listening and worrying. but only one more tree cracked, slightly further away from me. One of the seldom moments I was scared on the Pacific Crest Trail.

Early in the morning, I continued – today I will hit the border and enter Canada. the end of the Pacific Crest Trail. in heavy rain and cold temperatures. the climb out of this detour back up to the pct was simply terrible. rainsoaked scrub, bushes and grass hanging over the unmaintained trail. it felt like diving into a cold swimming pool, all over again! my neat trail running shoes were like a freezer! all of a sudden a girl caught up to me running and crying. ” I don’t know what to do, my feet are num!!!” she tried to run, with her puffy on, just to try to heat her feet. she didn’t have rainpants. even rain pants don’t keep dry, they keep warm. running with her puffy she was sweating and together with the rain, even her core became soaking wet. and she didn’t have a piece of dry cloth anymore in her pack! I knew as soon as we will come up to the pass it will be freezing cold and hard wind. I gave her my puffy, dry socks and plastic bags together with instructions when and how she has to change. then she ran again… there is a lot of hikers like her out on the Pacific Crest Trail. with a little harsher whether they end in serious situations, just because they don’t have enough experience or too bad equipment…

I made my way across two cold and windy passes, the rain turned to snow before we got a short window with better weather. shortly after noon on the 10th September, I reached the northern terminus of the pacific crest trail. 131 great days with 4280 km and 140722 m elevation gain are behind me!

A so-called post-trail depression seems to be common among thru-hike finishers. let’s see if and how this reach me after my Pacific Crest Trail experience! if I do want to go for another thru-hike? YES, but never again with a broken knee or foot. it takes too much energy and space in the mind.

Read about more trail experience in my blog! And some of my planned hikes you find on coming adventures!